Last week, multiple industry groups representing Internet service providers filed a petition asking the FCC to stay the unnecessary privacy regulations. The petition also discussed how ISPs are taking steps to protect customers’ privacy online. The groups, which include CTIA, NCTA, USTelecom, as well as various advertising and advocacy groups, state that the FTC's framework has protected Internet users for years while the FCC’s new rules create an inconsistent and confusing framework that weakens data protection online.
Posted by Unknown at 9:28 AM

Earlier this month, Accenture Strategy published a report entitled “Smart Cities: How 5G Can Help Municipalities Become Vibrant Smart Cities.” The next generation of wireless network infrastructure will employ 5G technology, which will feature the dense placement of small cells to deliver speeds 10 times faster than 4G. When 5G technology is deployed, cities will be able to enjoy smarter and more efficient use of local government services such as energy, utilities, transportation, and public safety.
5G wireless technology is anticipated to produce very large economic and social benefits in the United States. The Accenture report projects that 5G will create $275 billion in investment, 3 million jobs, and $500 billion in gross domestic product. In addition, the capabilities enabled by 5G technology will allow cities to save millions of dollars. For example, smart lighting automatically will dim public street lights when no pedestrians or vehicles are present. Public transportation will be able to reduce wait times by optimizing bus and train schedules with commuter smartphones. Vehicle-to-vehicle communications will minimize congestion and lead cars through hazardous road conditions.
When it comes to public safety, deployment of 5G networks in smart cities will save lives. High-speed video surveillance will allow first responders to assess crime scenes and dangerous situations before arriving. Real-time monitoring of gunshots will provide the police with exact locations and timelines. Sensors with 5G technology will warn local residents about possible emergencies, such as tornadoes, flooding, or security threats.
Importantly, 5G networks will impact positively cities of all sizes. The report estimates that 5G’s impact on the city of Saratog, CA, with a population of 29,900, will be 300 additional jobs and $50 million in additional economic activity. The use of 5G in the city of Beaumont, TX, with a population of 118,000, will create 1,000 new jobs and $180 million in additional economic activity. The use of 5G in the metropolitan area of Chicago, IL, with a population of 9,472,000, will create 90,000 new jobs and $14 billion in additional economic activity. 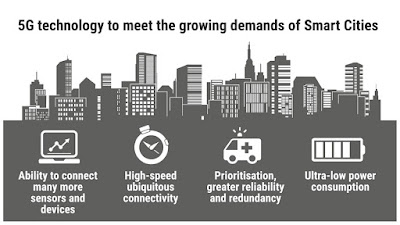 Another report published earlier this month by Deloitte, entitled “Wireless Connectivity Fuels Industry Growth and Innovation in Energy, Health, Public Safety, and Transportation,” contains similar findings on the economic and social benefits of 5G wireless technology. This report says that smart cities collectively could create $1.8 trillion in additional revenue to the U.S. economy. With regard to public safety, the Deloitte report finds that a one-minute reduction in response time translates to an 8% reduction in mortality. It also says that self-driving cars could reduce emissions by 40-90%, travel times by 40%, and delays by 20%. Whether the economic impact of 5G technology is $500 billion or $1.8 trillion, it is clear that deployment of 5G will make cities safer, healthier, and contribute significantly to the U.S. economy.
However, there are some existing regulatory barriers and practices that stand in the way of realizing these significant benefits. Some municipalities take 18 to 24 months to approve small-cell implementations. Also, because providers must deploy many densely-placed small cells for networks to operate smoothly, the practice of municipalities charging a fee for each individual cell placement will discourage deployment. Reducing these barriers, by allowing the use of public rights of way, eliminating or minimizing fees, and streamlining approval processes, will increase the rate of 5G deployment and help unlock smart cities.
5G technology is the future of mobile wireless broadband. And the future is now. Without unnecessary delay, the FCC, along with state and local governments, should take affirmative actions that encourage 5G deployment and, at the same time, eliminate, or at least reduce, restrictions and fees that hinder 5G deployment.
Posted by Unknown at 10:18 AM

Congratulations to Ajit Pai, who was appointed Chairman of the Federal Communications Commission by President Donald Trump. My colleagues and I agree that this is an excellent and deserving appointment. Given his resume as Commissioner, Chairman Pai will continue to push for free-market policies in the communications field, enabling competition, innovation, and investment in this space.
FSF is grateful that Chairman Pai recently spoke at FSF’s 10th anniversary luncheon in December 2016. We wish him the best of luck as FCC Chairman!
Posted by Unknown at 1:00 PM

On January 17, 2017, Scott Wallston, President of the Technology Policy Institute, published a blog entitled “Don’t Be Disappointed by the FCC’s Incentive Auction.” Mr. Wallston discusses why the success of the 2015 AWS-3 auction created unrealistic expectations for the broadcast incentive auction. He states that licenses restrict how bidders can use spectrum, therefore wireless-only spectrum will produce higher market values than TV broadcasting-only spectrum. Mr. Wallston commends the FCC for going forward with the incentive auction, but says if licenses allowed for a broader use of spectrum, we may see higher auction revenues.
Posted by Unknown at 11:24 AM


For over a decade, I’ve been advocating various reforms in the way the Federal Communications Commission conducts its business, wholly aside from debating the rightness or wrongness of the substance of particular agency decisions. In other words, I’ve long advocated certain process reforms intended to make the Commission function in a more efficient and effective manner, and, when appropriate, in a more transparent manner.


Without further elaboration here, I’ve been privileged to testify before the House Subcommittee on Communications and Technology in 2011, 2013, and 2015, in hearings on various draft bills proposing a variety of specific FCC process reforms. Congressman Greg Walden, then Chairman of the House Subcommittee and now Chairman of the full Committee on Energy and Commerce, deserves much credit for diligently pursuing the cause of FCC process reform during the last six years. Although several of the bills he sponsored, along with various of his colleagues, passed the House of Representatives, they were not given serious consideration in the Senate.


At the FCC, despite a few very modest gestures, there were no serious efforts by Chairman Tom Wheeler to adopt consequential reforms in the way the Commission conducts business. Indeed, some might argue that there has been a deterioration of process during Chairman Wheeler’s tenure that, if anything, has contributed to a deterioration in the substantive quality of the agency’s decisions.


But that is not the argument I wish to make today.


What I want to suggest is that, as soon as practical after it gets organized, the newly reconstituted Commission should get on with implementing process reforms. And, more specifically, I suggest, for certain changes that may be considered more controversial for one reason or another, that the Commissioners consider implementing them on a trial basis with a review to take place on a date certain. There is no reason why the Commission cannot be open to some experimentation and trialing in the area of process reform, secure in the knowledge that experience may dictate further modifications.


It is well-known that Commissioner Michael O’Rielly has been a vocal, persistent, and eloquent advocate of FCC process reform over the last several years through his blogs, speeches, and opinions. Indeed, in a July 2016 blog, “Snapshot of Process Reform Ideas,” Commissioner O’Rielly posted a list of 24 proposals he has made. In doing so, he explained that:


These efforts have never been an attempt to undermine the authority of the Chairman or the ability of the Commission majority, whoever they may be on a particular issue, to get items completed in a timely manner.  Instead, this entire effort is about improving the efficiency of the Commission and increasing fairness and transparency with regard to a process that is questionable in some instances and downright objectionable in others.


Consider one of Commissioner O’Rielly’s (and Commissioner Pai’s) most consequential proposals: “Publicly post Open Meeting items at the same time as circulated to Commissioners.” I happen to agree with this proposal. As I explained at some length in my May 2015 House Subcommittee testimony, posting the draft Open Meeting agenda items is consistent with the “best practices” suggested by the Administrative Conference of the United States in a 2014 Recommendation. And in an era when it became common practice for the agency’s Chairman to post a blog describing his own views regarding the contents of a draft item, often along with a “fact sheet” containing the Chairman’s own version of the “facts,” it seems to make little sense to deny the public access to the full text of the item. Posting the text on the Commission’s website will eliminate disparities in access by the public to Commission information and also reduce misunderstandings that arise from selective filtering and partial release of snippets of the draft item.


Nevertheless, because posting draft Open Meeting items represents a substantial departure from the way the Commission has operated for decades, many question how this change will affect the way the Commissioners interact among themselves and the public during the period leading up to the Sunshine cut-off period and whether, in turn, such changes may affect adversely the quality of the Commission’s decisionmaking. These are not frivolous concerns.


The principal point I want to make here is that I see no good reason why the Commissioners could not adopt that particular process reform with the proviso that the new procedure will be evaluated after a year or two. And, then, based on actual operating experience, changes can be made if deemed advisable.


The same can be said for other reform proposals about which there may be legitimate differences of opinion, such as requiring that all “editorial revisions” be completed and orders published within three or four business days after the Open Meeting. Or allowing any Commissioner to elevate a decision about to be made on delegated authority to a full Commission vote.


I start from the premise, which shouldn’t be subject to serious dispute, that there are ways that the Commission can improve its process – the manner in which it conducts its business – so that it operates in a more efficient, more effective, and more transparent fashion. Every institution can. There is no reason there should be any partisan disagreement about this.

Process matters. Better process not only can improve the productivity of the Commission, but, more importantly, it can improve the quality of the agency’s decisions. I certainly am not suggesting that all process reforms need to be subject to trials. But if the notion of trialing changes in procedure is a means to the end of getting certain consequential process reforms adopted sooner rather than later, the newly constituted Commission should be open to this idea.
Posted by Randolph J. May at 11:19 AM