For years Free State Foundation scholars have declared that Internet regulation increases costs for broadband providers and ultimately crowds out resources that otherwise would be used for capital investments to build-out and modernize network infrastructure. They made this point very clear, especially with regard to Title II public utility regulation, in their initial comments and reply comments during the Federal Communications Commission’s (FCC) Open Internet proceeding in 2014.
Nevertheless, in February 2015, the FCC adopted the Open Internet Order, which reclassified broadband as a telecommunication service and imposed Title II public utility regulation on broadband providers. The FCC stated confidently in the Order that “[h]istory demonstrates that this careful approach to the use of Title II will not impede investment.” The Commission also asserted in the Order that “our rules will not disrupt capital markets or investment.” After adoption of the Open Internet Order, FSF scholars have observed multiple times that these unnecessary regulations have, in fact, chilled investment from Internet service providers (ISPs). (See here, here, and here.)
In his address on April 26, FCC Chairman Ajit Pai cited FSF research estimating that the Open Internet Order "has already cost our country $5.1 billion in broadband capital investment." Just two years after the FCC adopted the Open Internet Order, I estimate that broadband providers significantly slowed investment, despite the claims by the FCC that the opposite would occur. Taking into account the latest USTelecom investment data, I now estimate that foregone investment in 2015 and 2016 was about $5.6 billion, an amount providers likely would have invested in a business climate without Title II public utility regulation.
Here is how I calculated that figure.
USTelecom publishes data on broadband capital expenditures (capex) for each year dating back to 1996. Using this historical data, I collected figures on the previous twelve years before the Open Internet Order was adopted in February 2015. I picked 2003 as the first year because the market had just collapsed from the dot-com bubble and total broadband capex was at its lowest point since 1996. I established a trend line from 2003 to 2016, which created a linear pattern over the first 12 years before the Open Internet Order and estimated what we could have expected broadband capex to be in 2015 and 2016 without Title II public utility regulation.
I also collected broadband capex data on sixteen of the largest ISPs for years 2014, 2015, and 2016. My sample found a 2.46% decline from 2014 to 2015 and a 4.69% decline from 2015 to 2016, totaling an overall decline of 7.04% from 2014 to 2016. These figures are pretty close to economist Hal Singer’s finding that a sample of twelve ISPs declined broadband capex by5.6% from 2014 to 2016.
In 2014, according to a December 2016 research brief by USTelecom, broadband capex totaled $77.4 billion. Therefore, a 2.46% decline over the following year means that total broadband capex in 2015 was $75.5 billion. The same research brief finds that broadband capex totaled $76.3 billion in 2015, but it says that “investment figures are rounded [to the nearest billion] due to the inevitable estimation involved in producing them.” In other words, USTelecom’s standard practice is to round this figure to $76 billion in 2015, so my estimate of $75.5 billion seemed to be right on track, suggesting my estimate for 2016 should be reasonably reliable. Despite the fact that my 2015 capex estimate seemed reasonable, I wanted to be conservative so I used the unrounded USTelecom estimate of $76.3 billion for 2015, and applied an additional decline of 4.69% from 2015 to 2016. Therefore, broadband capex in 2016 was about $72.7 billion.
But the important question is: how do these figures compare to the trend of broadband investment during the twelve years before the Open Internet Order was adopted?
Based on the trend, we should have expected total broadband investment to be about $76.6 billion in 2015. Even without the imposition of the Open Internet Order, a small decline in investment from 2014 to 2015 was possible because of the extent to which investment had increased beyond the trend line in the two years prior. (The graph below shows this pattern.) The difference between what was expected ($76.6 billion) and what actually occurred ($76.3 billion) was $300 million in foregone investment.
For 2016, I estimated total broadband capex to be $72.7 billion, but the trend estimated that the market should have invested about $78 billion. That is a difference of $5.3 billion in foregone investment. Summing that with 2015, broadband providers invested $5.6 billion less than what we could have expected before the Open Internet Order. (See the trapezoid in the graph below.) 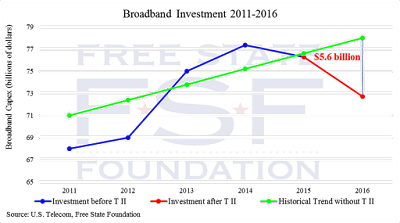