A Washington Post story a couple of weeks ago reported that Chen Guangcheng, the blind Chinese legal activist, newly arrived in America, has been using the Declaration of Independence as a makeshift textbook. As the Post story put it: "The 236-yesr-old document can make for difficult reading, but for a man who spent most of the past decade imprisoned in China while fighting for the rights of his fellow villagers, it resonates deeply."
What a marvelous text for an English vocabulary lesson! "Equal" and "Truths" and "Liberty" and "Consent of the Governed" and "Unalienable Rights." (Yes, it is "unalienable," not "inalienable," in the Declaration's text.) 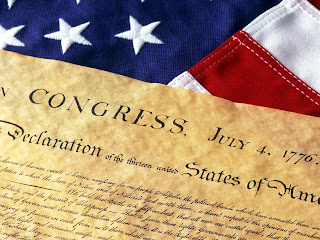 At a time when, according to a Boston Globe story, a third of American citizens don't know when the Declaration of Independence was signed, perhaps we can take some comfort – as well as some inspiration – from the fact that Chen is drawn to the Declaration as his vocabulary textbook.
Chen is quoted as stating that "China is on a march toward rule of law and democracy," and when that time comes, concepts like those proclaimed in the Declaration of Independence "will play a vital role."
The Free State Foundation's website proclaims one of our purposes is to promote understanding of "rule of law" principles. The "rule of law" is a term often bandied about, but sometimes little understood. So, with Chen's hard-won freedom in mind, it is appropriate to examine what the "rule of law," properly understood, means.
While there are some variations in formulation, for most commentators, crucial elements of a rule of law regime are: (1) fidelity to rules, (2) of principled predictability, (3) embodied in valid authority, (4) that is external to individual government decisionmakers. Putting these elements together somewhat less formally, in his book The Rule of Law in America, Ronald Cass explains that the rule of law "pulls society in the direction of knowable, predictable, rule-based decision making, toward the alignment of power with legitimacy."
I don't know for sure, of course. But I suspect that Chen, here in America celebrating his first Independence Day on our shores, will probably take time from his English lessons to reflect on how the Declaration of Independence proclaims principles consistent with the promotion of the Rule of Law, and how our Constitution, properly understood, secures our rights and protects our liberty under such a rule of law regime.
It would not be a bad thing for us to pause and reflect along with Chen.
And my very best wishes to all for a celebratory, as well as reflective, Independence Day.
PS – Previous Independence Day messages are here: 2007; 2008; 2009; 2010; and 2011.