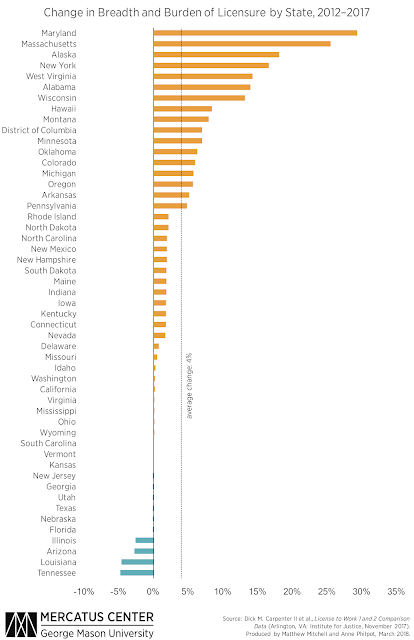 As I wrote in a July 2015 blog, Maryland’s occupational licensing regime harms consumers by restricting competition, which subsequently leads to higher prices. Importantly, unnecessary occupational licensing harms the poorest residents in the state, who are unable to afford the fees and training required with such licensing, therefore stifling upward mobility for poor entrepreneurs.
In the blog, I stated:
Because consumers ultimately pay higher prices as a result of the restricted competition, the increase in prices is disproportionately harmful to the poorest consumers. The higher a person’s income, the more willing that person is to adapt to price increases. Therefore, artificial increases in prices through occupational licensing have a large negative marginal impact on the poorest consumers. For example, pawnshops in Maryland, which can provide inexpensive goods, additional income, or short-term loans to poor individuals, are charging higher prices and interest rates than they would be able to charge if workers were not required to have an occupational license.
But the poorest individuals also experience the greatest burden on the other side of the market – as workers. Poor people often do not have the resources to acquire the mandated training, take the required tests, or pay for the licensing fees. This pushes them out of a labor market in which they may be skilled enough to compete. For example, a licensed plumber in Maryland must complete 3,700 hours in training. But a poor person with only 1,000 hours of training may be perfectly capable of fixing a toilet. It is not illegal for him/her to do so, but it is illegal to accept money for the service.
The Hogan Administration has done a good job reducing the overall burden of regulations over the last few years. As FSF President Randolph May and I noted in a January 2016 Perspectives from FSF Scholars, the Regulatory Reform Commission’s initial report recognized that Maryland’s occupational licensing regime was overly burdensome and was not protecting consumers. In a January 2017 Perspectives from FSF Scholars, we commended the Regulatory Reform Commission for identifying many occupational licenses that were unnecessary, outdated, or overly burdensome. And Governor Larry Hogan accepted all of the recommendations put forth by the Commission.
However, the data presented in the Mercatus Center study shows that there is more work to be done in Maryland. Although the 2018 legislative session has ended, occupational licensing reform should be a goal for the 2019 Maryland General Assembly. If Maryland wants to continue to produce economic growth and business investment throughout the state, it should lessen the burden of occupational licenses and enable more entrepreneurs to enter the labor market.
Posted by Unknown at 11:12 AM