Delegation, Deference, and the FCC

During the last week of its just-ended term, the Supreme Court handed down two eagerly anticipated decisions with significant implications for administrative law and, indeed, more broadly, for separation of powers constitutional jurisprudence. The two decisions are Gundy v. United States and Kisor v. Wilkie. While there will be thousands of pages in law reviews, blogs, and elsewhere devoted to dissecting various aspects of these two important cases – within the next several months, no doubt! – here I want to focus mainly on their implications for the Federal Communications Commission.


And, to be straight-up about it, I want to use the Court's opinions in the two cases as an occasion to highlight two earlier law articles of mine advocating what at the time seemed fairly radical administrative law and constitutional propositions – but which now appear much less so.


But first a brief recap of the principal holdings of the two cases. In Gundy, the Court rejected, by a 5 – 3 vote, Mr. Gundy's challenge to his conviction under the Sex Offender Registration and Notification Act (SORNA) for failure to register as a sex offender. Gundy, who had been convicted of his offense prior to SORNA's enactment, argued that the statute's delegation of authority to the Attorney General to "specify the applicability" of SORNA's registration requirements" and to "prescribe rules for [their] registrations" for pre-enactment offenders is so devoid of direction as to violate the nondelegation doctrine. In other words, Gundy argued that Congress unconstitutionally had delegated its legislative power to the executive branch.


Writing for the majority, Justice Kagan held the delegation "easily passes muster," especially in light of the Court's precedents affirming other broad delegations of legislative power so long as the statute contains some "intelligible principle" to guide executive branch officials in its execution. For good measure, Justice Kagan observed: "Indeed, if SORNA’s delegation is unconstitutional, then most of Government is unconstitutional—dependent as Congress is on the need to give discretion to executive officials to implement its programs." 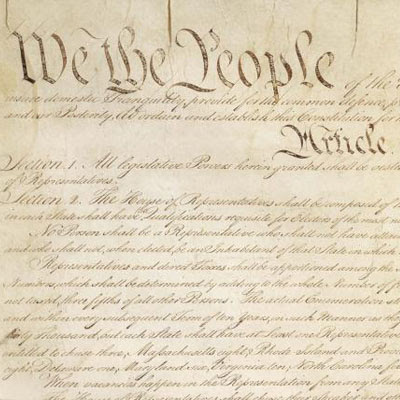 In an extended dissent, Justice Gorsuch, joined by Chief Justice Roberts and Justice Thomas, argued that SORNA gives the Attorney General too much "unfettered discretion" to decide which registration requirements to impose on pre-enactment offenders – in short, more policy-making authority than Congress may delegate to executive branch officials. Justice Gorsuch contended that the "intelligible principle" requirement has been applied so leniently that it has permitted "delegations of legislative power that on any other conceivable account should be held unconstitutional."

As for claims the Court should not be put in a position of policing congressional delegations by drawing lines as to the degree of permissible indeterminateness, Justice Gorsuch pointed to other instances in which the Court has reined in Congress in a way that necessarily implicates separation of powers boundaries: "These cases show that when separation of powers is at stake we don't just throw up our hands. In all these areas, we recognize that 'abdication is not part of the constitutional design.'"

All that said, Justice Alito's brief 145-word opinion "concurring in the judgment" likely is the most important of all for what it portends. While voting to reject the nondelegation challenge in light of the Court's precedents, he declared: "If a majority of this Court were willing to reconsider the approach we have taken for the past 84 years, I would support that effort. But because a majority is not willing to do that, it would be freakish to single out the provision at issue here for special treatment."

Justice Kavanaugh did not participate in the consideration of Gundy. But based on his D. C. Circuit opinions and other writings, there is little doubt that he is more than willing to reconsider the Court's approach to applying the nondelegation doctrine. So, it appears there are now five Justices prepared to do so – Chief Justice Roberts, and Justices Thomas, Alito, Gorsuch, and Kavanaugh.

And now to Kisor, which also implicates separation of powers principles. There the Court, with Chief Justice Roberts supplying the crucial fifth vote, refused to overrule the so-called Auer-Seminole Rock deference doctrine, which, in essence, requires judges to defer to administrative agencies' interpretations of their own rules. As Justice Gorsuch contended in a lengthy concurring opinion as vigorous as his Gundy dissent, separation of powers principles, once again, are implicated when judges defer to agencies' interpretations of their regulations rather than deciding for themselves, without application of any controlling deference, whether the regulations are lawful.  Justice Gorsuch, harkening back to Chief Justice Marshall's famous dictum in Marbury v. Madison that “[i]t is emphatically the province and duty of the judicial department to say what the law is,” stated the Auer deference doctrine "sits uneasily with the Constitution."

For my present purposes, with regard to Kisor, it is enough to point out that both Chief Justice Roberts and Justice Kavanaugh made clear that their concurrences should not be read to suggest that their refusal to overrule Auer necessarily implies the same result if the Court reconsiders the Chevron doctrine. As the Chief Justice stated: " Issues surrounding judicial deference to agency interpretations of their own regulations are distinct from those raised in connection with judicial deference to agency interpretations of statutes enacted by Congress."

Now, with this background in mind, I want to highlight my two much earlier law review articles that no longer appear, jurisprudentially, to be so bold. Indeed, I hope that one day in the not too distant future, the positions I articulated in 2001 and 2006 will be accepted by the Court.

First, in The Public Interest Standard: Is It Too Indeterminate to Be Constitutional?, 53 Fed. Comm. L. J. 427 (2001), I answered "yes." I rehearsed the history of the nondelegation doctrine and addressed the major precedents, acknowledging that the Supreme Court long ago rejected the claim that the public interest standard – which appears in the Communications Act over 100 times – is too amorphous to be constitutional. See FCC v. Pottsville Broadcasting Co., 309 U.S. 134 (1940) and National Broadcasting Co., Inc. v. United States, 319 U.S. 190 (1943).

In Pottsville, Justice Frankfurter thought it sufficient to conclude that the public interest standard "is as concrete as the complicated factors for judgment in such a field of delegated authority permit." You can read that formulation over and over until the proverbial cows come home and not discern any intelligible principle. Indeed, it calls to mind the old saw: "The public interest standard is whatever three of the five FCC commissioners decide on any given day." Just so. It is difficult to discern an "intelligible principle" in a delegation simply directing agency officials to act in the public interest. I am optimistic that when the Court reconsiders, in an appropriate case, the contours of the nondelegation doctrine, it will hold the public interest standard, under which so much of the FCC's regulatory activity takes place, out of bounds.

Second, in Defining Deference Down: Independent Agencies and Chevron Deference, 58 Admin. L. J. 429 (2006), I argued that the decisions of the so-called independent agencies, like the FCC, SEC, FTC, and others, should receive less deference under the Chevron doctrine than those of regular executive branch agencies. The argument is fully explained in the article. In short, the contention is that any fair reading of Chevron shows that the principal (even if not exclusive) rationale for granting deference to the agencies – EPA in that case – is the notion that Chief Executive, as opposed to the courts, is politically accountable. Because the independents are less politically accountable to the Chief Executive than are the executive agencies, it follows that their decisions should be accorded less deference upon review.

Well, if you're skeptical, it may give you comfort to know, as I point out in my Defining Deference Down article, that then-Harvard Law School dean – now Supreme Court Justice – Elena Kagan agreed with me in her notable Presidential Administration article published in the Harvard Law Review in 2001. There Justice Kagan suggested that a variable Chevron doctrine "would begin by distinguishing between actions taken by executive branch agencies and those taken by independent commissions." She concluded that the Chevron doctrine "attuned to the role of President would respond to the disparity by giving greater deference to executive than to independent agencies."

I've suggested many times that, based on my view of fundamental separation of powers principles, that the Chevron doctrine should be reconsidered as it applies to all agencies, not just the independents. But, at the same time, I've envisioned that barring such broader reconsideration, giving less deference to the decisions of the independents, would be a modest incremental step, as I said in my Defining Deference Down article, that would be "more consistent with our constitutional system."

Neither Gundy nor Kisor effected any revolution in administrative or constitutional law. But both involve fundamental separation of powers principles that go to the core of our tripartite system of government in which certain discrete responsibilities are assigned – and must be largely confined – to each of the separate branches. So, for now, it is enough to hope that, all things considered, the two decisions moved us some steps closer to the Framers' original constitutional understanding.
Posted by Randolph J. May at 10:53 AM