By Randolph May and Andrew Long
The so-called Kirwan Commission, established by the Maryland General Assembly in 2016, recommended a number of rather expensive reforms that it contends would improve the quality of public education in the state. To fund the Kirwan Commission proposals, the legislature is considering a tax on digital advertising services that singles out large online platforms. Such an approach is more likely to result in legal bills than increased funding for education. Considering that the proposed legislation is based upon a proposal apparently designed to force online providers to abandon ad-supported business models – rather than generate actual revenue – perhaps that is not surprising.
On January 8, 2020, incoming Maryland State Senate President Bill Ferguson (D-Baltimore) and President Emeritus Thomas V. Mike Miller (D-Calvert) introduced SB 2, legislation that targets digital advertising services with a tax on annual gross revenues. Delegate Alonzo T. Washington (D-Prince George's County) sponsored similar legislation in the House of Delegates, HB 695.
The first bill of its kind in the nation, SB 2 would impose a tax – ranging from 2.5 percent up to 10 percent – on annual gross revenues derived from "digital advertising services" provided via a "digital interface" within the state. It would not apply to traditional forms of advertising (print, TV, and radio, etc.). In addition, companies with less than $100 million in annual global gross revenues would be exempt. The focus thus is on large digital platforms (for example, Google and Facebook). 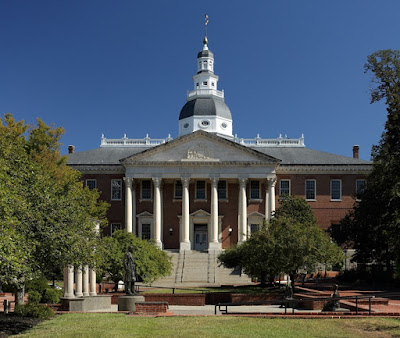 SB 2 is riddled with impracticable language. For example, the definitions of both "digital advertising services" and "digital interface" are broad and vague: the former includes "advertisements in the form of banner advertising, search engine advertising, interstitial advertising, and other comparable advertising services," while the latter applies to "any type of software, including a website, part of a website, or application, that a user is able to access."
Similarly, as originally drafted, SB 2 would have applied to any digital advertising service (1) when a user's device is assigned "an Internet Protocol address that indicates that [it] is located in the State," or (2) the user "is known or reasonably suspected to be using the device in the State" (emphasis added). (To our knowledge, companion bill HB 695 still includes this language.) As the Association of National Advertisers has explained, however, "consumers' IP addresses don't always reveal their locations," particularly when they are on mobile devices, and "the 'reasonably suspected' test for use … would be very difficult, if not impossible, to apply." Recent amendments to SB 2 have eliminated these problematic attempts to define the geographic application of the tax. Unfortunately, their replacement – an apportionment fraction that defines the amount of annual gross revenues to which this state-specific tax applies – inappropriately uses nationwide digital advertising revenues for its denominator.
Legislative analysts estimate that SB 2 could generate as much as $250 million per year in tax revenues. That assumes, however, that SB 2 survives judicial challenge, which, under a number of legal theories, is doubtful. For example, the Permanent Internet Tax Freedom Act prohibits discriminatory taxes on electronic commerce – but SB 2 would apply only to online advertising, and solely the largest providers. In addition, the U.S. Supreme Court on more than one occasion has struck down industry-specific taxes on First Amendment grounds. Similarly, the Maryland Court of Appeals in 1958 held that a tax on TV, newspaper, and radio was unconstitutional under the First Amendment. Given its focus on companies with annual gross revenues over $100 million, SB 2 also is vulnerable to a challenge under the Commerce Clause: a significant portion of those revenues likely are derived from activity outside of the state, therefore the tax could be found to discriminate impermissibly against interstate commerce.
Even if it withstands judicial scrutiny, SB 2 is a bad idea that would harm both consumers and businesses in Maryland. Digital advertising is a significant contributor to the economy, generating $130 billion in annual revenues. However, SB 2 would jeopardize that success by imposing a second levy, in addition to the sales tax, on goods and services marketed via digital advertising. A double tax would increase prices for consumers. As a consequence, demand – and sales tax revenues – would decline. That is why the Association of National Advertisers calls SB 2 "one of the most serious threats to advertising in the United States that we have encountered in decades."
In addition, SB 2 would encourage companies to redirect advertising expenditures to other states. That, along with increased costs, would lead to a reduction in total spending on digital advertising in Maryland, which would harm local businesses, in particular those that depend on advertising revenues. Were it to go into effect, SB 2 would subject consumers to higher costs, reduce sales tax revenues, and generate less funding for education than anticipated by disincentivizing participation in Maryland's digital advertising marketplace. Considering the immodest proposal that inspired it, this last harm, in particular, is to be expected.
Senate President Ferguson told the Washington Post that the draft legislation builds upon a May 6, 2019, article in the New York Times by economist Paul Romer. In that opinion piece, Romer advocates for a tax on digital advertising – specifically targeted advertising – not because of the revenue it would generate, but rather due to his objection to targeted advertising generally.
But this is misguided. Targeted advertising is the lifeblood of the Internet as we know it. Consumers willingly provide personal information (browser history, etc.). In return, they receive "free" content and services. Exposure to targeted ads – which, incidentally and importantly, provide information on specific offerings that, by definition, they are likely to find compelling – is the non-monetary price that they agree voluntarily to pay. This voluntary exchange enhances consumer welfare, and even more so for low-income individuals.
Romer makes clear, however, that he would prefer that digital platforms abandon this win-win business model and switch to ad-free subscription (pay) services. A tax on targeted advertising is the stick he would use to force them to do so. In fact, when Romer testified in late January at a hearing before the Maryland State Senate's Budget and Taxation Committee hearing on SB 2, he reportedly stated that he wants targeted advertising to stop and that he would be happy if the tax resulted in no revenue.
A tax on digital advertising services would reduce consumer welfare by imposing on ad-supported services additional costs, in the form of taxes, specifically and primarily designed to modify providers' behavior. According to its architect, that harm is a feature, not a bug.
Maryland should reject this highly flawed digital advertising tax and look elsewhere for a source of additional revenue for education if it wants to fund some or all of the Kirwan Commission recommendations. All told, SB 2 would require the state to expend substantial sums on legal fees; likely never go into effect; lead to higher prices if it did; shift advertising spending to other states; harm both consumers and businesses, in particular those dependent upon ad revenue; and undermine popular ad-supported business models. In other words, it would do more considerably harm than good.