On Tuesday, CTIA released the 2022 edition of its annual wireless industry survey. Among other milestones, it documents an unprecedented level of investment, accelerated cell-site deployments enabled by regulatory reforms, the explosive adoption by consumers of 5G devices, inflation-defying price decreases, and the rapid rise of fixed wireless as a viable home broadband alternative.

Specific findings from the survey include the following: 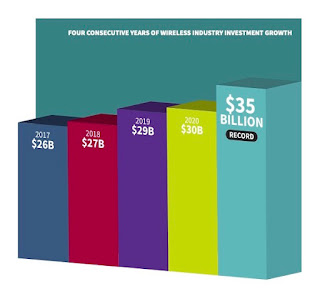 5G service today is available to 315 million Americans. And consumers are adopting this mobile broadband technology at a brisk pace: the total number of deployed 5G-capable devices grew by over 500 percent during just the past year. Consequently, one in three adults now have a 5G-capable smartphone or other device.

While consumer prices overall have increased by 94 percent thanks to "historic" levels of inflation, prices for unlimited data plans have fallen by nearly half since 2010.

5G fixed wireless quickly has emerged as a viable competitive alternative for home broadband service: over 40 million households already have access to this option.