I know it's a somewhat cutesy title. But spectrum matters do matter. Now more than ever with burgeoning demand for various spectrum-dependent services.


On October 25, 2018, President Donald Trump issued a Presidential Memorandum on Developing a Sustainable Spectrum Strategy for America's Future. This is a welcome development if only because it elevates the priority to be placed on spectrum matters within the Trump Administration. 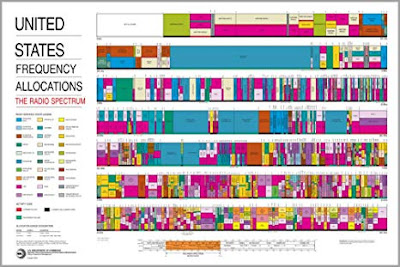 The memorandum explains that additional spectrum access is not only important for the U.S. economy, especially with 5G wireless technology on the horizon, but it is also important for protecting national security. Given the growing spectrum demand, President Trump recognized that the U.S. must focus spectrum matters with some sense of urgency:


In the growing digital economy, wireless technologies expand opportunities to increase economic output of rural communities and connect them with urban markets, and offer safety benefits that save lives, prevent injuries, and reduce the cost of transportation incidents. American companies and institutions rely heavily on high-speed wireless connections, with increasing demands on both speed and capacity. Wireless technologies are helping to bring broadband to rural, unserved, and underserved parts of America. Spectrum-dependent systems also are indispensable to the performance of many important United States Government missions. And as a Nation, our dependence on these airwaves is likely to continue to grow.


Those demands have never been greater than today, with the advent of autonomous vehicles and precision agriculture, the expansion of commercial space operations, and the burgeoning Internet of Things [IoT] signaling a nearly insatiable demand for spectrum access. Moreover, it is imperative that America be first in fifth-generation (5G) wireless technologies — wireless technologies capable of meeting the high-capacity, low-latency, and high-speed requirements that can unleash innovation broadly across diverse sectors of the economy and the public sector.


To the point that timeliness matters, the presidential memorandum requires federal agencies, including the National Telecommunications Information Administration and the FCC to report within 180 days "on the status of existing efforts and planned near- to mid-term spectrum repurposing initiatives."


NTIA and the FCC are to be commended for their efforts during the last two years to make more spectrum available to enable the offering of innovative new services. So, to suggest that the Presidential Memorandum should spur the affected agencies to act with even greater dispatch is not to be critical.


Here I want to take note of two spectrum bands, by way of example, that are the subject of repurposing initiatives that hold the promise, if resolved in a timely manner, of making spectrum available that can be used to meet the growing demand for wireless services and for what the memorandum calls the "burgeoning Internet of Things."


First, the 5.9 GHz band. In 1999, the FCC assigned the 5.9 GHz band to Dedicated Short Range Communications (DSRC), which was intended to be used for vehicle-to-vehicle safety communications. But in the almost two decades since, the spectrum has remained largely unused for its intended purpose, while automotive safety technologies have been developed in the marketplace using non-5.9 GHz frequencies. Even automakers have stated in comments filed with the Department of Transportation and the FCC that they are moving beyond the DSRC technology to other non-DSRC automotive safety wireless technologies.


On October 29, 2018, the FCC released a report on its first of three phases for testing to determine if Wi-Fi can operate in the 5.9 GHz band without interfering with DSRC. In part the report stated: "We recognize there have been a number of developments since the three-phase test plan was announced in 2016 — such as the introduction of new technologies for autonomous vehicles, the evolution of the Wi-Fi standards, the development of cellular vehicle-to-everything (C-V2X) technology, and the limited deployment of DSRC in discrete circumstances."


In connection with the report's release, FCC Commissioner Michael O'Rielly stated: "The reality is that the entire debate has gravitated away from the type of sharing regime envisioned in the testing. Instead, the Commission should move past this and initiate a rulemaking to reallocate at least 45 megahertz of the band, which is completely unused today for automobile safety." FCC Commissioner Jessica Rosenworcel issued a statement to the same effect.


This is an instance in which the FCC should move forward with dispatch looking towards repurposing this band for the use of unlicensed Wi-Fi services. Repurposing the 5.9 GHz band could lead to more Wi-Fi offloading, which, in turn, could free up spectrum for future 5G mobile networks and spur additional next-generation services and innovations.


Second, the L-band. NTIA and the FCC also should move forward as promptly as possible to facilitate action on Ligado Network's application to use the fallow L-band spectrum to deploy its satellite and mobile network. As Free State Foundation Senior Fellow Seth Cooper stated in a June 2018 blog, the L-band spectrum can deliver advanced satellite technology in combination with terrestrial mobile technology, but, for now, it remains unused pending the resolution of interference claims. In May 2018, Ligado filed an amendment to its spectrum license modification applications in which it stated:


Mid-band spectrum like the spectrum licensed to Ligado is vital to U.S. leadership in 5G because of its reliability and suitability for high-quality coverage and capacity deployment. If the Modification Applications are approved, Ligado will be uniquely positioned to leverage the potential of this mid-band spectrum by offering next-generation network capabilities. Ligado would concentrate on targeted deployments that deliver focused, highly secure and ultra-reliable communications over custom private networks to specific geographic locations that serve the industrial Internet of Things and the emerging 5G markets, particularly in critical infrastructure industry sectors such as rail, trucking, utilities, public safety, and oil and gas.


A May 2016 report by economist Coleman Bazelon projected that Ligado’s hybrid network would generate between $250 and $500 billion in social welfare benefits by relieving growing demand pressure for mobile wireless broadband services. Ligado has affirmed its intent to invest $800 million in satellite and terrestrial network infrastructure with the prospect of creating approximately 8,000 jobs.


If Ligado's applications ultimately are granted, the projected social, economic, and national security benefits to the public, and to the nation, appear to be substantial. I understand that there are continuing claims from various quarters asserting that Ligado's proposed network raises still-unresolved interference concerns, despite Ligado's efforts over the last couple of years to address the concerns in a constructive fashion. Perhaps in this instance – as with the 5.9 GHz band and others too – President Trump's Memorandum will provide the federal agencies involved with a renewed commitment to act in a way that facilitates the repurposing of the L-band spectrum. As Seth Cooper and I said in reply comments in July 2018 in response to Ligado's recent application amendment, working with NTIA, "the Commission should do all it can to reach a final decision on the application modifications in a timely manner."


Of course, sometimes a memorandum is just another memo. But President Trump's Spectrum Strategy Memorandum ought to be more than just another memo. I am not suggesting that it purports to dictate the outcome of the two proceedings discussed here or any others. But I hope that, in this instance, the directive is a signal the Trump Administration intends to address America's growing spectrum needs as "efficiently and effectively as possible" and with a sense of dispatch.
Posted by Randolph J. May at 11:48 AM