In light of rising concerns about the Cancel Culture, and specifically various actions by the #BigTech social media sites, there have been increasing calls for regulation of Facebook, Google, Twitter, and the like as common carriers. In other words, imposing regulation akin to traditional public utilities which, generally, are subject to nondiscrimination obligations.

For example, Justice Clarence Thomas has suggested the idea in a concurring opinion in Biden v. Knight First Amendment Institute. I wrote about Justice Thomas's opinion here in Part 3 of my "Thinking Clearly About Speaking Freely" series. 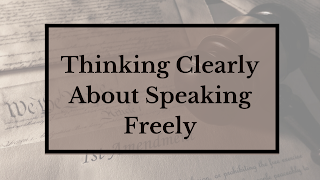 While I'm concerned about many of the actions taken by the dominant social media platforms, I'm reluctant, at least at this point, to support moves to treat them as common carriers. As I explained recently here, they don't all hold themselves out indiscriminately to serve all comers in the way that traditional public utilities do, and they don't all necessarily exercise the same degree of marketplace dominance. These are the two most prominent indicia of common carriage at common law.  Moreover, common carrier regulation, more often than not, has been applied in a way that discourages investment and innovation, even when, in theory, the common carrier regime incorporates "reasonableness" standards that allow for some flexibility.

And aside from all that, with regard to the Ohio AG's action, I worry about a patchwork of state regimes imposing different regulatory requirements on what truly are national and international business operations.