A Competitive Carriers Association (CCA) study raises serious concerns that, contrary to the FCC's intentions, ratepayer dollars will be used to subsidize the overbuilding of existing broadband networks.

The goal of the $20.4 billion Rural Digital Opportunity Fund (RDOF) is to incentivize the construction of broadband network infrastructure specifically and exclusively in those areas that are, and are likely to remain, unserved. 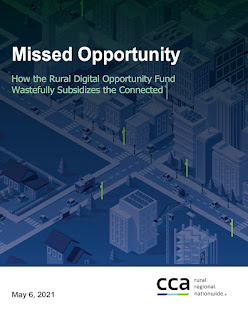 By all accounts, however, the broadband availability data that currently exists is fraught with problems.

For more information on the Digital Opportunity Data Collection, an in-progress mapping-modernization effort initiated by then-Chairman Ajit Pai in 2017 and funded by Congress at the end of last year, please see "A Primer: The COVID Relief Bill's Broadband Funding Provisions," a December 26, 2020, post to the FSF Blog, and "Congress Should Fund Needed Broadband Maps This Session," a November 2020 Perspectives co-authored by Free State Foundation President Randolph May.

Nevertheless, based upon the belief that existing data does indicate with sufficient accuracy those census blocks completely lacking broadband, the FCC conducted the RDOF Phase I reverse auction at the end of last year. 180 bidders won a total of $9.2 billion in subsidies to connect 5.2 million locations understood to be unserved.

But according to "Missed Opportunity: How the Rural Digital Opportunity Fund Wastefully Subsidizes the Connected," a study the CCA filed with the FCC on May 6, as much as $1 billion of that money – more than 10 percent – instead will go "to wealthy, densely populated areas that already have access to broadband."

High-profile examples include Cupertino, California, the home of Apple Inc.; Fisherman's Wharf in San Francisco; and parts of the downtown Chicago business district.

All told, CCA warns that RDOF Phase I subsidies could be used to overbuild existing, privately funded broadband networks serving nearly 300,000 locations and over 400,000 people.

The CCA therefore urges the FCC to "reaffirm its commitment to closing the digital divide by using its ample authority to prevent scarce, high-cost funds from needlessly subsidizing broadband deployment in areas that already have it."