The apparently growing yearning for socialism in the United States is disturbing. Disturbing enough that even Chuck Schumer and Nancy Pelosi joined the applause when, in his State of the Union address, President Trump proclaimed: "America will never be a socialist country."
History is replete with socialism's tragic failures for those who choose not to ignore history. But one need not retreat to the history books for proof. Today Venezuela may be Exhibit A, but there are many others, such as close-by Cuba.
And while socialism's appeal among the young is on the rise, its elixir spans the generations. Witness the almost half-century age difference between 77-year old Bernie Sanders and 29-year old Alexandria Ocasio-Cortez, two of the most prominent stars in the American socialist firmament. Indeed, a recent Gallup poll reports that Democrats view socialism more positively than capitalism – and by a wide margin.
Perhaps all the proud new socialist devotees have taken to heart Oscar Wilde's tongue-in-cheek quip: "The one duty we owe to history is to rewrite it."
To be sure, it's one thing to proclaim, "I am a socialist," and entirely another to understand what you mean to suggest, programmatically, by so proclaiming. For example, while we can be certain that "Medicare for All" and the "Green New Deal" would mean considerably more government control of the health care and energy markets, the programmatic details of such control would need to be worked out. 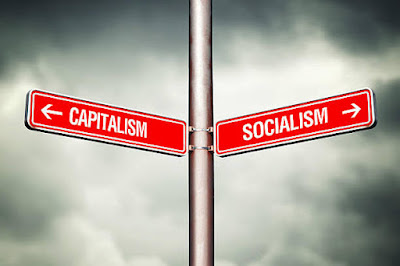 Here I want to focus on what socialism might imply for communications policy, and, more specifically, for control of the channels of communications that enable the American public to connect with their families, friends, and civic groups, to engage in social and political affairs, and to inform and entertain themselves. In short, to live their everyday lives by communicating freely.
What do the socialists have to say about this?
By no means did Karl Marx and Friedrich Engels, in The Communist Manifesto, ignore the significance of control of communications channels to the establishment of the socialist revolution. One of the ten key measures that Marx and Engels said would be necessary in advanced countries to achieve the proletariat revolution is: "Centralisation of the means of communication and transport in the hands of the State."
Of course, with a vengeance that was ruthless, Vladimir Lenin put Marx's and Engels' injunction into practice as he consolidated control of communications in state-run propaganda organs, while simultaneously vanquishing independent media.
In other words, Venezuela's Hugo Chavez, once the darling of American liberals such as former Representative Joe Kennedy and actor Sean Penn, didn't invent the socialist playbook regarding state control of the media and communications channels.
Now fast forward to America, circa 2009. In an interview with a publication called The Bullet, a publication of "The Socialist Project," Robert McChesney said this, in the context of discussing what he called "the battle for network neutrality": "What we want to have in the U.S. and in every society is an Internet that is not private property, but a public utility. We want an Internet where you don't have to have a password and that you don't pay a penny to use. It is your right to use the Internet."
Robert McChesney, an American professor teaching at the University of Illinois at Urbana- Champaign, not only publishes in "The Socialist Project," he is an avowed socialist. Here is what The Socialist Project says about itself: "The SP opposes capitalism out of necessity and supports the anti-capitalist struggles of others out of solidarity."
Oh, and by the way, Robert McChesney is a co-founder and director emeritus of the advocacy organization, Free Press.
I mention Robert McChesney's connection to Free Press because the organization is a leader – if not the leader – in the fight to turn Internet service providers into public utilities by once again shackling them with so-called "Title II regulation." In its January 2018 Restoring Internet Freedom Order, the FCC's current Republican majority repealed the Title II public utility regulation of Internet providers that had been mandated by the Obama FCC.
Now, please carefully note: I am not suggesting that, like Professor McChesney, all advocates of Title II regulation of Internet providers are socialists, although I suspect an increasing number would proudly embrace the label. In any event, thankfully, we live in a free country in which you can call yourself whatever you wish, and more importantly, believe whatever you wish.
But here's what I am suggesting: With infatuation with socialism on the rise, it is wise to pay attention to what socialist ideology implies for communications policy. The House Communications and Technology Committee held a hearing last week on "Net Neutrality." And a Free Press representative was invited by the Committee majority to testify, and she advocated a return to public utility regulation of Internet providers. That being so, it's worth repeating Free Press's co-founder Robert McChesney's declaration: "What we want to have in the U.S. and in every society is an Internet that is not private property, but a public utility."
Oscar Wilde may have said: "The one duty we owe to history is to rewrite it." I prefer Winston Churchill's felicitous rephrasing of George Santayana: "Those who fail to learn from history are condemned to repeat it."
Posted by Randolph J. May at 10:34 AM