With the growing infatuation with socialism in mind, on February 11, I posted a blog titled "Whither Socialist Communications Policy?"There I said: "I want to focus on what socialism might imply for communications policy, and, more specifically, for control of the channels of communications that enable the American public to connect with their families, friends, and civic groups, to engage in social and political affairs, and to inform and entertain themselves."

Here I want to continue that examination.

In the first postI took as my point of departure the following statement of Robert McChesney, one of the co-founders of the advocacy group Free Press:

"What we want to have in the U.S. and in every society is an Internet that is not private property, but a public utility. We want an Internet where you don't have to have a password and that you don't pay a penny to use. It is your right to use the Internet."

Professor McChesney said this in an interviewpublished by "The Socialist Project"inThe Bullet.The Socialist Project says this about itself: "The SP opposes capitalism out of necessity and supports the anti-capitalist struggles of others out of solidarity." 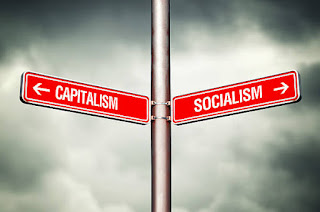 In today's environment, it's worth considering what "the socialist project" – not the publication but the project– implies for communications policy. At the least it implies that the Internet would be considered a "public utility" and regulated as such. As practiced in the United States, historically, the notion of public utility regulation may encompass a range of government controls. At one end of the control continuum, it may mean regulating the service provider's rates, terms, and conditions. At the other end, it may mean government ownership of Internet networks, including control of content. Recall that, in Robert McChesney's version, socialism means "an Internet that is not private property."

But now let's focus on the second part of Professor McChesney's statement: "We want an Internet where you don't have to have a password and that you don't pay a penny to use."

This "want" conjures up an inherent pitfall with socialism in practice, rather than as an ideal postulated breezily in campaign slogans. This is the notion that to satisfy various "wants," certain goods and services should be "free" and, indeed, that somehow they arefree if the government is paying for them, rather than you and me directly. The campaigns for "Medicare for All," "Free College for All," and the "Green New Deal" all rely on the seductive promise that the government itself will bear the burden of the increased societal costs imposed by the distribution of more "free" goods and services. (Note that the "Green New Deal" promises economic security for all who are "unwilling to work." Supporting all those unwilling to work, along with all these other mandatory societal transformations, won't be accomplished on the cheap.)

So, here's the reality with regard to what it means to satisfy the "want" of an Internet "that you don't pay a penny to use." Over the past two decades private sector service providers, wireline and wireless, have invested close to $2 trillion dollars of their own capital.

Thanks to this private sector investment, according to the FCC’s 2018 Communications Marketplace Report, at the end of 2017, about 94% of the U.S. population had access to fixed broadband Internet access services offering speeds of 25Mbps/3Mbps for downloads and uploads, and 70% had access to two or more providers offering such speeds. Indeed, the FCC's most recent broadband deployment report shows that, at the end of 2017, the number of Americans with access to 100 Mbps/10Mbps fixed broadband increased by nearly 20%, from 244.3 million to 290.9 million. At the same time, there was more than a 25% drop in Americans lacking access to fixed broadband.Moreover, as prices have declined,speeds have steadily increased. For example, according to a recent report from Ookla, broadband speeds, on average, increased by more than 35% in 2018.

According to a January 2017 report by Accenture, the build-out of next-generation 5G wireless broadband networks is projected to create 3 million new jobs and $500 billion in gross domestic product throughout the United States. The new 5G networks, requiring the deployment of 800,000 new small cells, are expected to deliver broadband speeds from 10 to 100 times faster than current wireless 4G networks, spurring innovations such as autonomous vehicles, smart cities and homes, and a variety of "Internet of Things" applications.
But guess what: The build-out of new 5G wireless networks won't be "free" either. Private sector wireless companies are expected to invest an additional $275 billion in 5G infrastructure, above and beyond existing investment. And, of course, the other broadband providers – cable, telephone, and satellite operators – will continue to invest relentlessly in their own high-speed broadband networks in order to try to maintain their positions in a competitive marketplace.
There should be no dispute that it should be a national objective to ensure, to the extent possible, that all Americans have access to broadband, as the Telecommunications Act of 1996 put it, "on a reasonable and timely basis." As the above figures show, achieving this important national objective is a costly endeavor – and costly on an ongoing basis as the demand for ever higher speeds and greater bandwidth continues to accelerate.
In sum, socialism wrongly implies the government itself should undertake the expenditure of the hundreds of billions of dollars required to deploy, own, and operate advanced broadband networks – and then control them – so you don't "pay a penny to use" them.
But surely this is not the best way to benefit American consumers or taxpayers as a whole. Rather, the best way is to continue to allow private sector firms to invest their own risk capital in a free marketplace as they seek to earn a return on their investment. In the current competitive broadband environment, in a technologically dynamic Internet ecosystem, these private firms, absent heavy-handed government controls, have every incentive to meet present and evolving consumer demands in the most efficient, effective, and least costly manner. They will do this at considerably less cost to American consumers and taxpayers than will government-controlled networks. That is the virtue of free market enterprise.
FINAL NOTES: No, I am not for a moment suggesting, in choosing capitalism over socialism, that there does not need to be any governmental oversight over Internet service providers. Such oversight, properly calibrated to match the need to protect against consumer harm to the extent marketplace competition is lacking, is consistent with a free market system.
And, no, I am not suggesting that despite the remarkable accomplishments of private sector broadband providers over the past two decades at deploying broadband networks ever more ubiquitously at ever higher speeds that there is not a proper role for the government in helping to close remaining digital divides. There is. For example, as readers of this space know, for well more than a decade I have been a steadfast advocate of a properly-run Lifeline program to support access to affordable communications for low-income persons. Government support for this "safety net" program is also consistent with a free market system.
Posted by Randolph J. May at 8:03 AM