Charter will invest $5 billion in this infrastructure expansion project, including $1.2 billion that it won in the Rural Digital Opportunity Fund (RDOF) Phase I reverse auction. This large-scale effort, which will extend Charter's fiber optic network in 24 states, is in addition to existing, privately funded buildout plans.

The project is expected to generate 2,000 new jobs and expand Charter's network mileage coverage by 15 percent. 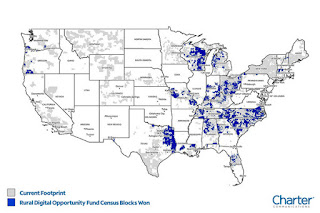 In announcing the initiative, Tom Rutledge, Chairman and CEO of Charter Communications, explained that "[t]he pandemic has further highlighted the need for broadband availability and adoption and Charter is committed to furthering its efforts as part of the comprehensive solution needed to address these challenges."

One potentially significant external factor that could impact the timing of this project: utility pole permitting and "make-ready" processes.

Free State Foundation President Randolph May and Director of Policy Studies and Senior Fellow Seth Cooper submitted comments to the FCC in September 2020 in support of a Petition filed by NCTA – The Internet & Television Association seeking an expedited declaratory ruling regarding pole replacements and pole attachments.

Specifically, they argued that the Commission should:

Mr. Cooper posted to the FSF Blog on this topic, as well.

On January 19, 2021, the Wireline Competition Bureau released a Declaratory Ruling that, while declining to weigh in broadly on the issues presented in the Petition filed by NCTA, did narrowly "clarify that it is unreasonable ... for utilities to impose the entire cost of a pole replacement on a requesting attacher when the attacher is not the sole cause of the pole replacement."