In a March 2022 Perspectives from FSF Scholars, I (1) called attention to the numerous, overlapping federal initiatives to extend broadband infrastructure to those areas that remain unserved, and (2) underscored the need to coordinate those efforts to ensure that taxpayer dollars are put to good use and the goal of ubiquitous connectivity in fact is achieved.

A recent report issued by the Government Accountability Office (GAO) made similar points – and inspired FCC Commissioner Brendan Carr, consistent with his comments during the Free State Foundation's Fourteenth Annual Policy Conference, to call for the Biden Administration to "put a national strategy in place to ensure that the federal government delivers on this opportunity to end the digital divide."

In "Overlapping Broadband Appropriations Demand Agency Coordination: New FCC Maps Can Track Grants, Avert Waste," I identified some of the biggest federal broadband subsidy programs, in terms of dollar amounts, and presented (via the chart reproduced below) a theoretical total spend of over $450 billion dollars. 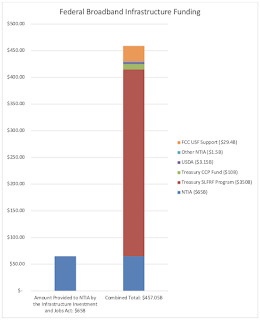 The GAO report, entitled "Broadband: National Strategy Needed to Guide Federal Efforts to Reduce Digital Divide," identifies "at least 133 funding programs that could support increased broadband access" under the purview of 15 different agencies – and warns that "[t]his patchwork of programs could lead to wasteful duplication of funding and effort."

Accordingly, the report recommends that the "Executive Office of the President … should develop and implement a national broadband strategy with clear roles, goals, objectives, and performance measures to support better management of fragmented, overlapping federal broadband programs and synchronize coordination efforts."

In a Statement dated June 10, 2022, Commissioner Carr marked the release of the GAO report by "sounding the alarm," yet again, "on the troubling lack of oversight and coordination when it comes to the federal government's expenditure of hundreds of billions of dollars that Congress appropriated for ending the digital divide."

Contending that "it appears that the Administration has turned the spigot on full blast and then walked away from the hose," Commissioner Carr called for the creation of a national strategy.

As my colleague Seth Cooper highlighted in a May 31, 2022, post to the FSF Blog, Commissioner Carr made similar points during a #FSFConf14 panel moderated by Mr. Cooper.

Among other things, Commissioner Carr noted that, by his count, ten times the amount needed to connect every American – $80 billion – has been appropriated, but absent improved interagency coordination, he remains "very concerned that we're going to flash forward a couple of years, the $800 billion dollars is going to gone and we're still going to have a significant portion of the digital divide that we didn't close."